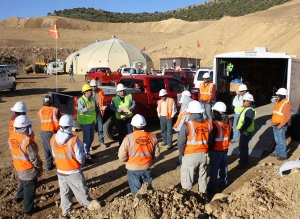 Since 2004, COMANCO has been recognized annually by Engineering News Record as one of the Top 200 Environmental Firms in the country. COMANCO is an environmental and civil construction company specializing in the construction of containment facilities for Municipalities, Solid Waste companies, Power Generation Utilities, Mining Operations and Industrial Chemical Plants providing geosynthetic lining and performing earthwork, installing pipe and providing remediation and repair services. We now are licensed installers for Liquid Boot ® cold spray applied membrane to protect against vapor intrusion.

For over 30 years COMANCO has been finding lasting solutions that meet or exceed our customer’s expectations by supplying quality products, installed by trained, experienced people, and backed by a company with a reputation for delivering exceptional service and value. Each year our experienced crews, most with more than five years’ service with COMANCO, install over 100 million square feet of geosynthetics at project sites across the nation.

Talk with a Specialist to discover what COMANCO can do for you. Do your next project the right way, “The COMANCO Way” because your business and our reputation depend on it.

To expand the knowledge of all COMANCO employees to such levels that they are truthfully empowered with every requirement necessary to safely perform their jobs and furthermore conduct all other personal activities with safety and confidence.

The year was 1989 and George Herbert Walker Bush took the oath of office as the 41st President of the United States.  In that same year, a young man named Mark Topp, along with T.R. Johnson and Bob Johnson, started a small company specializing in environmental and civil construction.  They named it COMANCO, an acronym for COnstruction MANagement COmpany.

Coincidentally, 1989 was the year the first of 24 Global Positioning Satellites launched into orbit. Years later, COMANCO adopted the technology to provide real-time updates displaying the job as it progresses.   With the help of proprietary software named CAAB, developed by COMANCO, we can produce a finished drawing, detailing the location of every panel, elevation, and repair of the finished project, with incredible accuracy.

In July 2005, COMANCO moved its offices from Professional Place in Tampa to our new campus at 4301 Sterling Commerce Drive in Plant City, FL.  Over the past 30 years, the company has grown, expanding its reach across the country, including the establishment of an office in Reno, NV.  To keep up with demand, the workforce has grown to more than 300 experienced, well-trained employees, many of whom have been with the company for more than five years.

Recognized every year since 2004 by Engineering News Record as one of the Top 200 Environmental Companies in America, COMANCO has completed more than 3500 projects and installs more than 100 million square feet of geosynthetic liner every year.